I have always been interested in art from around the age of eight or nine years old. I used to sketch my classmates at school to earn a bit of pocket money, and I had my first exhibition at a local library at the tender age of fourteen. I worked as a knitweard esigner when I left university, designing knitting patterns for newsstand magazines and yarn companies, which I did into the nineties. I have been successfully selling my original artwork online since around 2000 and my paintings hang in private collections all over the world and have been used for the sets of several TV and film productions.

*Artwork bought for set of second series BBC's The A Word

* Artwork commissioned for set of German TV drama, The Watcher. 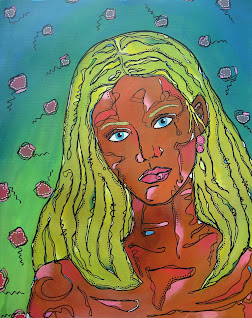